Enter your City name or Pincode

Dungarpur is a district city in the Indian state of Rajasthan. Also known as "The City of Hills", it lies in the foothills of the Aravalli range. Mahi and Som are the two rivers irrigating the southwest part of the region making it fertile. The district is divided into five Tehsils and two municipalities. As per the census of 2011, there are 976 villages in the district. Dungarpur is famous about the green marble found here that is found here and shipped globally. It is one of the fastest developing cities in India today and carries a high tourist fame owing to the magnificent architecture of its palaces and royal residences. 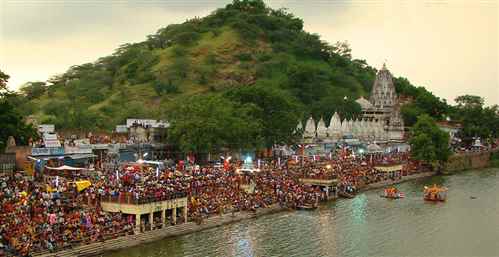 The district of Dungarpur lies in the southern Rajasthan on the border of Gujarat. With geographical coordinates of 23.84°N 73.72°E, city has an average elevation of 225 m or 738 feet. Roughly triangular in shape, district is bounded on the southeast by the districts of Sabarkantha, Panchmahal and Dahod of the state of Gujarat. The Vatrak River also originates here. The district has an area of 3,770 square KM with a population of 1,388,906 as per census of 2011. The city of Dungarpur is easily accessible by rail, road and air. National Highway No. 8 that runs between Delhi and Mumbai passes through the district while the nearest railway station is just 3 KM from here. One can even choose to hop on a flight to the nearest airport of Udaipur which is 120 KM from here.


History and Culture of Dungarpur

As early as 4000 BC, the district Dungarpur was occupied by the Bhil people. Bhils continued to be a major ethnic group here during Rajput rule and under the British raj, Bhils formed core of the military and police. The state of Dungarpur was invaded in 1197 by Samant Singh, a Rajput prince from Mewar, however it took some time for Rajputs to take control over the area. It was founded in 1258 AD by Rawal Veer Singh, the eldest son of Karan Singh, after he drove out the local Bhil chieftain named Dungariya. The Rajputs named the region as Bagar or Vargar.

Hindi and Rajasthani are the local languages spoken in the area. The district boasts about a good sex ratio of 990 females for every 1000 males. The population density in the area is 368 inhabitants per square KM with a literacy rate of 60.78%. There are many fairs organized here from time to time and visited by people from far & near. Some of the popular fairs are Ghotia-Amba fair, Vitthaldeo fair, Baneshwar fair, Purnima Garba, Amit Egyaras and ShreeShetrapaljidada fair.

Any travel is incomplete without indulging in shopping and one can indulge in shopping different locally made items when being here. Dungarpur is famous for its indigenous toy industry. Beautiful toys portraying humans and animals are made here from wood and lacquer is used to give them a shiny look. One can easily find these creative toys in fairs and local shops. In addition to this, picture framing by gold and silversmiths is quite popular here. Moreover, the district is known for large scale production of teak, rice, mangoes and dates.

There are many places of tourist interest in Dungarpur that are frequently visited by tourists from all over. The district is known for its palaces, ancient temples, museums, lakes and royal residencies with exceptional architecture. There are also dense forests here where one can plan to go on trekking and see wide variety of wildlife including jackals, jungle cats, foxes, porcupines and mongooses.

Named after Maharawal Udai Singh II, the palace has classic Rajput architecture style with detailed designs in balconies. The palace is quite huge and divided into three parts namely Raniwas, Udai Bilas and Krishna Prakash or Ek Thambiya Mahal. The Ek Thambiya Mahal features ornate balconies, bracketed windows, arches and sculptured pillars. There is a beautiful wing that is made of the local bluish grey stone, called Pareva, and overlooks the lake. Today the palace is turned into a heritage hotel and is worth visiting.

Juna Mahal
Juna Mahal is a 13th century seven-storeyed structure that is a popular tourist attraction. Anyone visiting here would be spellbound by the beautiful interiors that include murals, miniature paintings, delicate glass and mirror work. The palace is built on a high platform constructed from Pareva stone and has rugged exteriors to give resemblance to a citadel. At the exteriors, it is well planned with watchtowers, fortified walls, narrow doorways and corridors to delay the enemy as long as possible. 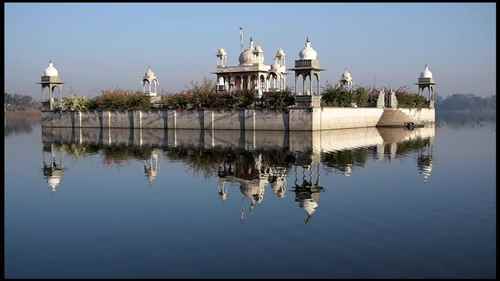 The Gaib Sagar Lake is famous for the shrine of Shrinathji that rests on its banks. There are numerous exquisitely carved temples in the shrine complex along with one core temple, Vijay Rajrajeshwar Temple. It is a Lord Shiva temple and displays the skilled craftsmanship of the famous Dungarpu sculptors. Maharawal Vijay Singh ordered the construction of this temple that was completed in 1923, during the reign of Maharawal Lakshman Singh.

Badal Mahal
The Badal Mahal is another splendid palace in Dungarpur that is worth visiting. It is located on the Gaib Sagar Lake and is built using Pareva stone. One can witness fusion of the architectural styles of Rajputs and Mughals here. The monument consists of two stages, three domes and one verandah. In each dome, there is carved a half ripe lotus however in the largest dome there are three.

Baneshwar Temple
The Baneshwar Temple is situated on a delta formed at the confluence of Som and Mahi rivers. The most revered Shivlinga of the region can be worshipped here. The Shivalinga is believed to be self-created, stands five feet high and is split broken at the top in five parts. Close to the Baneshwar temple is situated the Vishu Temple that was constructed in 1793 AD by Jankunwari, daughter-in-law of Mavji, a saint who is believed to be the incarnation of Lord Vishnu. It is said that at this place Mavji spent his time praying to the God. There is also Lord Brahma temple besides this temple.

Surpur Temple
Located on the banks of the Gangdi River, this is an ancient shrine about 3 KM from Dungarpur. There are many attractions around the temple including Bhulbhalaiya, Madhavrai Temple and Hathiyon ki Agad.

There are many other places of tourist interest in and around Dungarpur including Deo Somnath, Galiakot, Kshetrapal temple, Boreshwar, Shree Jetholeshwar Mahadev Temple, Sarneshwar Mandir, Shri Adinatha Jain Swetamber Temple and Raghunathji Temple.

Anyone visiting Dungarpur can be sure of a comfortable stay with all kinds of modern amenities and services available here. Below is a quick list of some of the common services in Dungarpur.

Are you a Business Owner?

Add the products or services you offer